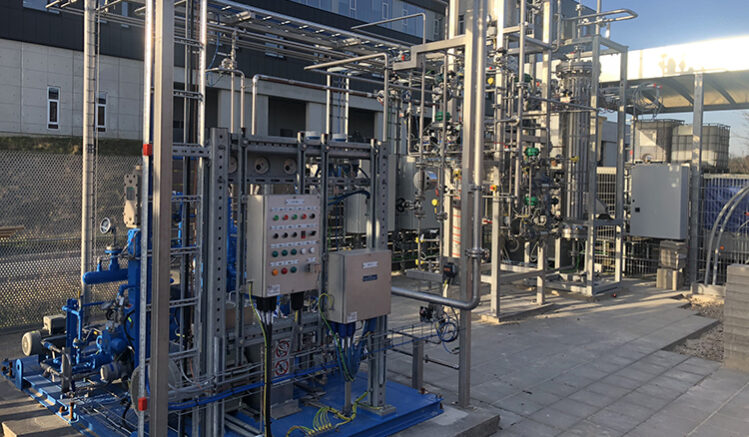 Under the leadership of the companies REintegrate and Green Hydrogen Systems, the partners in the Power2Met project have established the first eMethanol installation in Denmark to demonstrate how eMethanol can be generated from hydrogen and CO2.

While a great deal is still being said and written about Power-to-X (PtX), the first drops of eMethanol have already trickled out in the pilot plant that has been established at Aalborg University. It is expected that the plant will have the capacity to produce 300,000 litres of eMethanol per year, which will then be sold to demonstration and development projects in Denmark.

“Up to 20 people from local and national enterprises have been involved in the project in recent years, and with the right framework conditions for the PtX technologies in place, there is enormous potential to create Danish jobs. The politicians are now holding the key that can open up a market for PtX products. What we need is for the authorities to greenlight regulatory free zones to a much greater extent, allowing producers of green electricity to conclude agreements directly with a PtX facility without the deal being subject to electricity tariffs,” explains Søren Knudsen Kær, CTO at REintegrate, which delivered the eMethanol synthesis loop to the plant in Aalborg, in partnership with the engineering company Process Engineering.

eMethanol is produced on the basis of renewable energy and can thus help Denmark meet the government’s ambitious climate goals for 2030, and make the transport sector more eco-friendly. Heavy transport is major a thorn in the side of the green transition, and this segment stands to benefit greatly from using eMethanol, seeing as how it is not possible to make aircraft, seagoing vessels and goods vehicles fossil-free through direct electrification.

Utilisation of sustainable sources of energy
The first of its kind in Denmark, the plant features an electrolysis installation supplied by the Danish company Green Hydrogen Systems, which converts electricity from sustainable sources of energy (solar and wind) into hydrogen. “Electrofuels – or ‘liquid electricity’, as eMethanol is also called – are expected to achieve their major breakthrough in the immediate future. The production of electrofuels will allow us to utilise electricity from wind turbines and solar installations at times when capacity exceeds demand, thus helping assure the balance between demand and consumption in the grid,” says Morten Brandtoft, Business Development Director at Green Hydrogen Systems.

eMethanol market on the way
There is already much to suggest that there is enormous potential in the market for eMethanol, as it may present one of the most effective ways for the heavy transport sector to reduce its appreciable climate impact. The sector association Drivkraft Danmark – which is also a partner in the Power2Met project – is optimistic about the potential for using eMethanol.

“We have a key role and a special responsibility to ensure that the green transition spreads onto the roads, and we are convinced that electrofuels such as methanol will prove crucial to the transition of the transport sector. We have already come a long way in supporting PtX fuel, but it is important that we shift focus from mixing requirements to general CO2-suppression. An obligation to suppress CO2 would mean requiring suppliers of transport fuels to ensure that their products emit less CO2 than if the vehicle in question ran on fossil fuel,” explains Michale Mücke Jensen, Manager, Engineering and Environment, at Drivkraft Danmark.

Turnkey installation and the next step
With the establishment of the first plant, the partners in the Power2Met project expect to have laid the foundations for a full-scale eMethanol installation that can be set up locally and close to companies that generate significant carbon emissions.

The plant in Aalborg has been constructed as a pilot plant, and the next step will be to establish eMethanol production in connection with a biogas plant. Together, these two plants would become more commercially viable by making use of the CO2 that they currently emit into the atmosphere, while simultaneously producing eMethanol for the transport sector. The solution is set to be launched onto the market in 2021, and work is already under way on developing the first projects.

In addition to these official partners, a number of local companies including Hobro Rustfri Procesteknik and Victor DST were involved in the project as subcontractors.

If you have any questions, please contact Søren Knudsen Kær, CTO for REintegrate, on +45 40204795 or at skk@reintegrate.dk, or Morten Brandtoft, Business Development Director for Green Hydrogen Systems, on +45 40603030 or at mbr@greenhydrogen.dk.

Facts
eMethanol can be used in existing combustion engines if it is mixed with petrol, and it can also be incorporated into the production of some types of biodiesel. Moreover, it can replace fossil fuel in modified ship’s engines. eMethanol is liquid and can therefore be distributed in the same way as ordinary petrol and diesel. As the combustion of eMethanol does not emit more CO2 than was used to produce it, the utilisation of eMethanol will be carbon neutral.